A scale is a set of notes which sound melodic when played together. There is a scale starting at each piano key in an octave. There are seven white keys and five black keys in an octave making twelve scales altogether.

Octave 4 starts at C4 (Middle C) and ends at B4. The base Major Scale starts at C4 and consists of all the white notes up to the C key of the next octave (C5). These are shown with red squares. 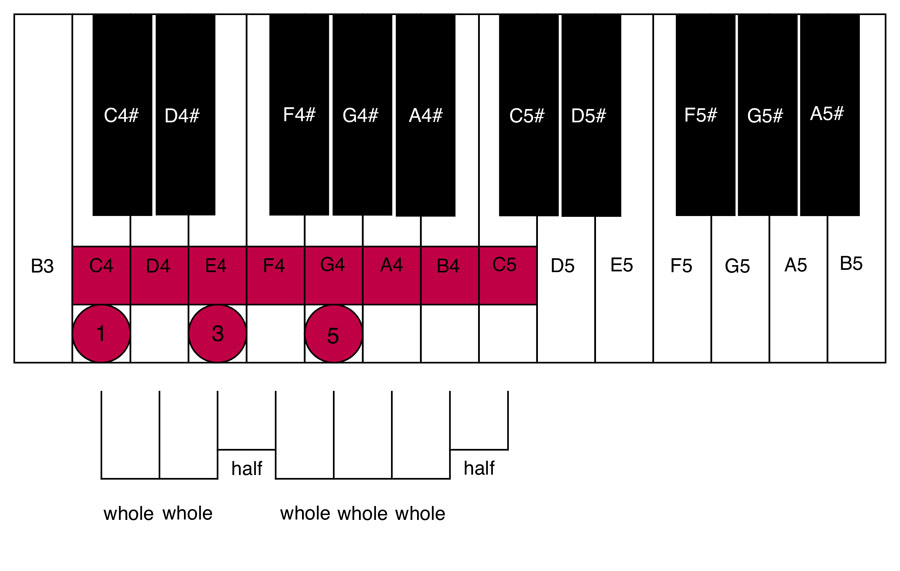 Steps and half steps

Major Chords are the first, third and fifth notes of a Major Scale played together. The notes C4, E4 and G4, from the C Major scale make up the C major Chord. These are shown by the circles numbered 1, 3 and 5.

Deriving the other Major Scales

The rest of the scales are determined by the same method. Starting at a key apply the step pattern to find the remaining keys for it's scale. There are total of twelve scales per octave i.e C,C#,D,D#,E,F,F#,G,G#,A,A# and B.

There is a Major Chord for every Major Scale, comprising the first, third and fifth notes