Duration of notes on a music score

The fundamental unit of time for a musical note is a Beat. The speed at which a piece of music is played is specified as beats per minute (BPM).

A music score is divided into time intervals (measures) by vertical lines called bars. The most common type of music has 4 beats in a measure. This is denoted by the large pair of stacked 4's at the start of the score. The top 4 gives the number of beats in an measure. The lower 4 means each beat is 1/4 note. Thus there are 4 x 1/4 notes in a measure. In the score shown below the first measure has four notes of 1 beat, each being called a quarter note (or crotchet). The second measure has two notes each consisting of 2 beats. These are each called a half note (or minim)

A note which is 4 beats long is called a full note, or semibreve. It is shown as an unfilled ellipse at the start of the first measure in the score below. Fractional notes can be seen in the second measure - An eighth note, or quaver, is 1/2 of one beat. It is shown as a filled note with a flag on it's tail. Adjacent eighth notes may be shown with their tails joined by a single bar. A sixteenth note, or semiquaver, is a 1/4 of a beat. It is shown as a filled note with two flags on it's tail. Two or more adjacent sixteenth notes may be joined by a double bar. The total number of fractional notes in a measure must add up to 1 whole note 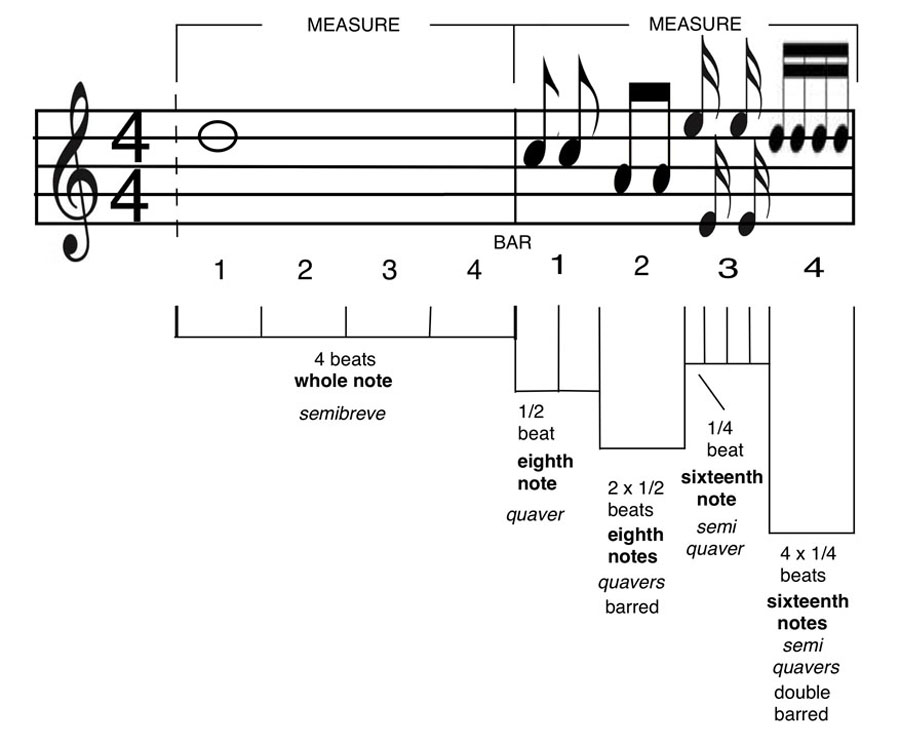 Rests on a music score

A rest is a period of silence where no note is played. Rests can consist of a number of beats or of fractions of a beat. The first measure in the diagram below shows a Whole Rest. It lasts for 4 beats thus occupying whole measure. It hangs underneath the second to top line in the centre of the measure. The second measure shows a Half Rest lasting for two beats - beat1 and beat 2. It sits above the centre line at beat1 - the first of the 2 beats it occupies. A half note is shown occupying beat 3 and beat 4 to complete the measure.

Some shorter rest symbols are shown below - 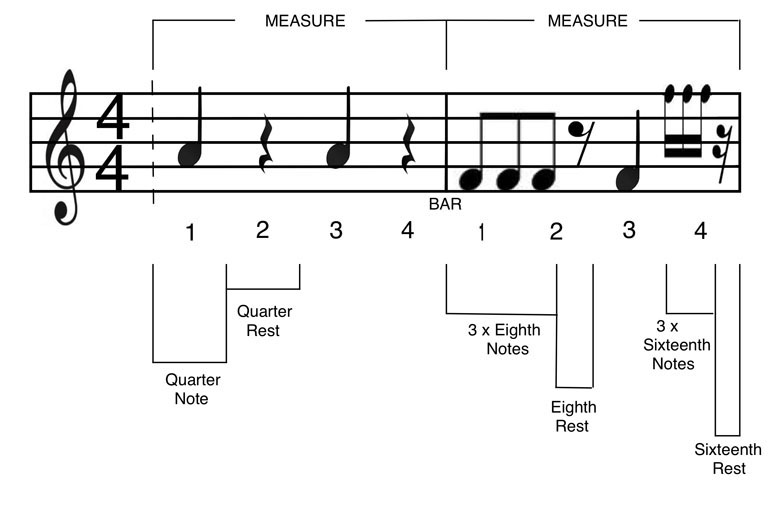